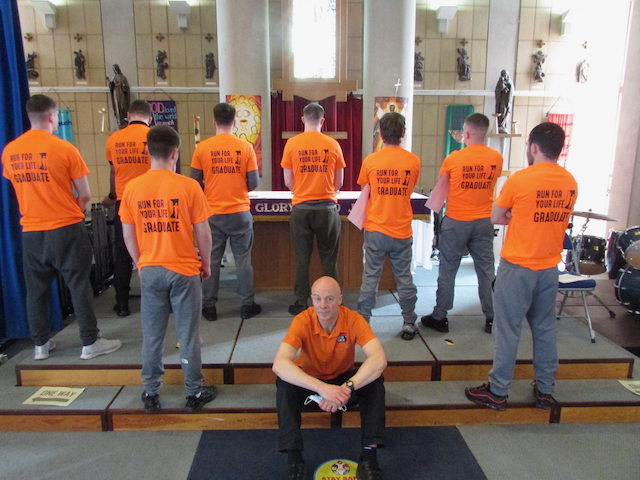 I had a little cry the night I finished the work at HMP Brinsford.

Which was a bit of a shock.

Mrs Mouncey and I went for a walkie-talkie when I got home that evening and, well…

She took it rather well, I thought.

Here’s the thing: In the 8 years I’ve been in this kinda work nothing else has provoked a reaction like this – which begs the question why this and why now?

Not an insignificant number of easy biking and running hours later – this also doubles as my Making Sense of Stuff time - I arrived at some conclusions. Then I tested those conclusions with someone who knows me enough, has been in this line of work for way longer than me and who, I believe, really knows his onions.

Most of my group of young men were in their early 20’s but there were also a good number who were 19. My eldest son is 14 – which is only 5 short years away.

And as a parent that’s way too close for comfort.

Now I have done work with this age group previously but that has been with ‘at risk of offending’ groups in the community: This is a first for me to work with this group in a custodial setting.

And here’s the thing about a custodial setting in the Spring of 2021: While covid restrictions ease in society in general prisons lag behind. For the last year there has been no education, no work-based training, no organised physical activity – and no family visits.

There are reasons for this and I’ve written about those reasons previously - and the fact remains: My group have been mainly in their cells with very little to do and very few people to do it with – and a few were still experiencing the most basic version of that regime.

And to my eyes they’re still just kids – just with a very particular model of the world.

Not exactly master criminals either: Most are – to my mind anyway – doing time because they couldn’t control their emotions. They are in prison because of a crime of the heart in a moment in time – or two moments in the case of a second offence.

I’d argue that’s not a crime of the head – it’s not thought-through and it’s not organised.

You want to know what organised crime looks like? Try this:

This was a deception that was meticulously planned and executed over multiple years that spanned continents, cost millions, emmeshed thousands and left broken people and livelihoods in its wake - oh, and all covered by the elaborate smokescreen that was his charity work.

Where is he now?

Still got his house and family and some people are still giving him employment.

What’s he lost? Seven yellow T-shirts, a few sponsors and not that much of his fortune.

(He also settled a few things out of court, a few folks quite reasonably took their awards back and he got stuck with a life ban - but seems to have fared considerably better than your average 19year old at HMP Brinsford).

Though I do very occasionally wonder what his kids think of it all.

And a justice gap the size of the Grand Canyon.

That’s just a particularly high-profile example from the world of sport. Other examples from business and politics are also available. If you really want to depress yourself you can come up with your own list – though I figure you’ll throw in the towel in disgust long before you run out of examples.

Not a million miles away from mine.