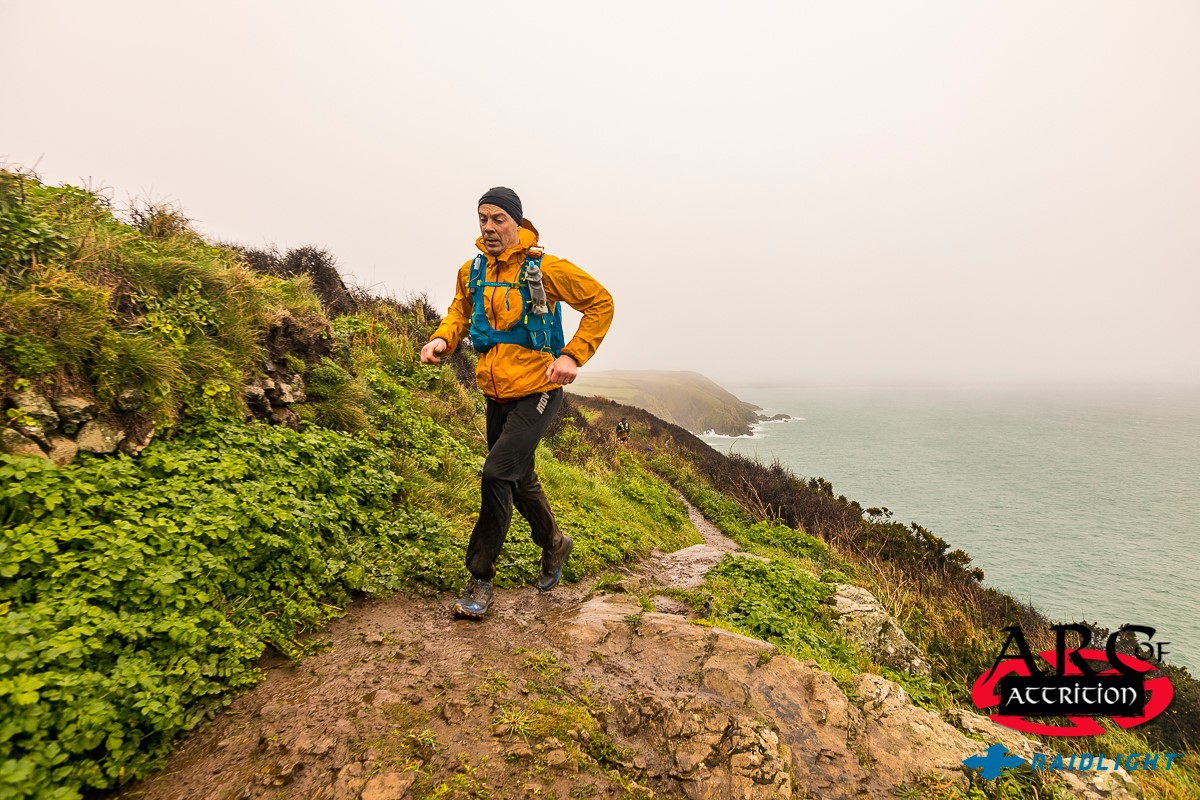 Mile 81 and I’m blowing out of my arse trying to stay with Leanne. We hooked up about a couple of hours into the race and an easy companionship has evolved without either of us saying much. I’d started at the back and caught her as I worked my way up the field noticing how well she moved over the treacherous terrain in contrast to most of the blokes doing Bambi impressions around her. Then I heard her periodically behind me say something as we both passed another bloke and then it was just us in some space…

As I’d set a goal around hooking up with someone of like mind this time it would seem that Brain had settled on this one as my chum of choice.

I was to learn later that she sure had some race pedigree.

She was also strong out of the checkpoints and on both previous occasions at around 25 and 56miles I learned that if I could just hang with her for the first hour or so we’d settle down again.

Now it was mid morning of the second day and we’d just left the CP at St Ives heading north up the Cornwall coast after starting 12 noon the previous day some 80 seriously gnarly miles ago behind us and east round the SW coast from Coverack near the famous Lizard Point.

Six hours of daylight then 12 under torchlight as we rounded Lands End looking for daybreak as close to St Ives as we could get. In contrast to the grim weather of the previous afternoon and first part of the night to LE, this morning has dawned sunny and clear – though the wind is still strong.

We had a brisk stop and I did not eat most of the food I ordered – suddenly not hungry and nothing looked appealing. I’m aware this is not good – but more pressing is that Leanne is now almost surging ahead and for the first time our elastic is stretching. Someone told her at the CP she was now 3rd lady and clearly she wants to keep that podium spot. I grit my teeth, utter a few choice words and work to keep the rising discomfort levels the right side of seriously unpleasant.

It’s alright, she’ll settle down – just hang in for a bit longer…

But after 80 miles and around 23 hours it feels like I’m at sprint-effort – even if speed over the ground is somewhat lacking. The good news is that it’s pulling me along – the bad news is that I’m heading into a hole that the ‘don’t want to eat’ thing has opened up for me to fall in to.

That’s all to come. For now I’m thankful that Leanne takes some walking breaks before heading off again but it’s a game of chase-close-chase again.

This goes on for 5miles and includes a lengthy detour inland on road to cross an estuary – a big shock to the legs after lots of up-down rocky-muddy miles. Then by way of contrast we hit sand dunes – a section called the Dunes Of Doom on the race info. The clue’s in the title and it certainly is for me as it’s here that the elastic snaps and I fall almost thankfully into the hole that has been waiting to swallow me for the last hour or so. And while Leanne will slow a lot over these final few hours it’s way less that I will and she gets to keep her podium slot. Chapeau!

Meanwhile the fun has really started behind her…

I shuffle through the dunes thankful that at least it’s daylight and I can follow footprints – this section would be a maze at night and cause for a serious sense of humor failure. A couple of miles later I emerge to be greeted by friends Steve, Linda & Jim and daughter Hannah who have made the trip from Exeter to see what this ultrarunning lark is all about.

I still have enough wits about me to realize I have to get some warmer gear on and try get some food down me – and smile and communicate and educate the impromptu never-been-tested support crew. Fortunately I had anticipated this and had written down a ‘Managing The Mouncey’ list in advance.

This basically boiled down to three columns:

3. Shit you SHOULD NOT EVER take from me

I have around 12 miles to go and I’m well aware that it wont be pretty. I’ve managed to get a banana down me and some hot juice and I’m in my get-out-of-jail Montane Hydrogen top brought along for just this scenario: I may be somewhat short of full operational capacity – but at least I am now Mr Toasty.

Friends Reunited say they’ll meet me about 3 miles on where the road hugs the path so as they disappear down the road I disappear into my hood. I bully myself out of shuffle mode into something resembling meaningful forward motion to go up this steady climb ahead of me round this next headland before it levels out for a while.

I try very hard to break into a jog using some of the gentle downhills as momentum but it just ain’t happening.

Just when you need some f***in’ poles…

It’s a bit more fundamental than that - though poles would help at this point as they’d take the pressure of my feet and that would enable me to move easier and faster – in theory anyway.

(Later I’d realize that three factors conspired to derail me in this final quarter of the race: I’d made two poor decisions and experienced one systems problem.

Decision Two was the choice to chase Leanne.

Systems Problem One was the loss of any desire to eat.

Decision One was the choice to swap shoes and socks at half way from newer trainers that drained well and thin socks to older shoes that were less porous and socks that were thicker. This retained moisture and gunk and this accelerated the onset of mascerated feetwhere the soles become saturated and it feels like you are running on broken glass.

I’d suffered before and that had forced me to make changes to how I looked after my feet during a race. Well, I’d got that right in the first half but blown it after Lands End. What had made it worse was the unexpectedly warm sunny second day: I could feel my feet burning and tenderizing as I chased Leanne out of St Ives to the point – about now – where the prospect of any extra pressure being put through my points of contact didn’t really bear thinking about.

Oh for a nice soft golf course to finish off…

There was still plenty of mud in prospect but golf courses were conspicuous by their absence. But 3 miles on and I’m still moving which in the grand scheme of things is just fine.

Friends Reunited reunite and I emerge from my hood without stopping to be fed tea, half a biscuit and a humbug. Linda elects to stay with me and I’m happy to have her along even if I’m not exactly Mr Chatty. It’s pancake flat for a while and I should be running but… (sigh).

For the penultimate time we hit a village at the bottom of a cove. Portreath means around 4 miles to go but suddenly I have a wobble and need to stop. I can feel myself going down which is not good news. Fortunately we’re on a slight slope so in true old man style I lower myself to the deck and lie down with my head down the slope - so my feet are higher - and lie there for a minute breathing like a stranded fish while gravity shunts blood to my brain.

Getting upright again is interesting but with help I manage it and do the girding of loins bit for what I hope will be the final time. (It isn’t).

Jim has lent me his walking poles and without them I’m not sure I’d have done this last bit without resorting to hands and knees crawl both up and down hill.

The race organisers have added two stupidly steep ascents into this bit for no other reason than I can see other than for our pain and their entertainment. Time stretches on and on and I almost run out of rude words. Linda is stoic either ahead of behind me as I totter, crash, stumble and swear my way up, down and ever slowly onward. My goal of finishing in daylight and under 30 hours is blown by an hour and it’s all on this last bit within touching distance of the end.

The final 500 meters or so are an utter cluster-f**k to finish with:

A steep rocky climb through gorse on a path 12-18” wide marked by glow sticks.

The enthusiastic marshals at the start of this final bit do the usual positive –spin well-intentioned but ultimately meaningless final hurrah.

It’s utterly wasted on me.

I just stop, look at the climb, look back them.

One word comes to mind:

The only way I’m getting started is if Linda hoists me unceremonionally up and over the small roadside rise. Thereafter the air turns a periodic blue as I turn to the Johnny Rotten coaching model:

I drive my poles in as though the deeper I stick ‘em the more I’m making the bastard hill hurt:

Of course we get there – and while it’s not my most exuberant finish (?!) it IS a finish after what was a proper little adventure.

Which was all I really wanted, actually.

The finish: The ground was wobbling – I was steady as a rock…