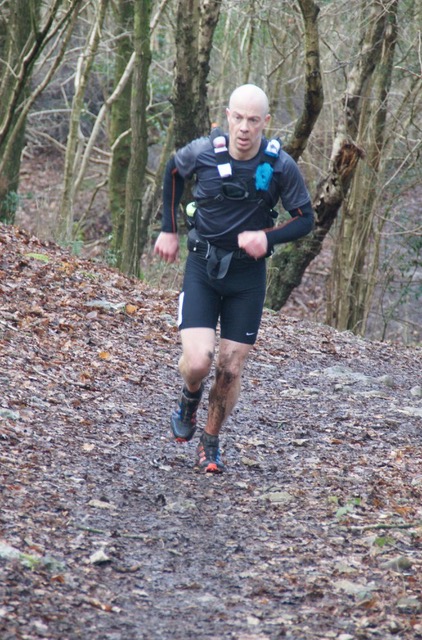 Competitive Bloke comes with me to races. He’s usually there at key training sessions as well. Sometimes I let him out just before the fun starts and sometimes he’s jumping up and down in his vault days beforehand, dribbling evilly at the prospect. We’re on intimate terms but I wouldn’t want to sit down for another pint with him because, well, he’s just not very…nice.

Saturday was a case in point. He knew he was going to be let out to play and was like a small manic child sedated for his own safety: Fine until the dose wore off but then leaping up and down in a froth-filled fantasy of anticipation at the prospect of THE RACE – until I put him under again.

Ascend Events Silverdale Circuit was 21 miles of twisty coast-woods-limestone scars with frequent quagmires thrown in for good measure. A new event for me and so I’d been round it the week before taking my time to get the route nailed in strong winds and snow showers and it was still beautiful – and it confirmed what I suspected: Navigation was going to be crucial.

So I’ve done my homework, I know I’m in shape and I fancy my chances. Competitive Bloke knows it too – and he’s turned all the way up to Number 11.

800 yards in and three of us are off the front. The guy on my shoulder turns and gives Competitive Bloke his first opening:

‘Do you know where you’re going then?’

‘Guess we’ll find out, wont we?’ A sideways look and an evil grin get thrown across the gap for good measure.

Competitive Bloke isn’t giving anything away because:

1. This guy has just telegraphed he doesn’t know the route and /or has no confidence in his navigation.

His third sin is failing to take responsibility for all aspects of his race – and Coach Mouncey is real pissed at that one.

So now it’s two against one and that’s really not fair.

‘Points for persistence though ‘cos a few hundred yards further our man tries again:

‘Done this race before?’

But I do know the course – it’s just that Competitive Bloke ain’t sharing.

Having killed any prospect of conversation – CB really doesn’t do talking that much when he’s out and he doesn’t invite it either – the plotting starts in earnest:

How to drop him?

Stop for a wee?

How can I mess with his head?

We start with the last one.

I have my route notes to hand and make a show over the next few minutes to periodically refer to them. My pace is all business and CB knows that can be a give-away all on it’s own, so sprinkling seeds of doubt is just good misinformation strategy.

Meanwhile ahead of me there’s a bonus: I spot the leader missing a turn – and while he corrects quickly it’s all fuel for CB’s fire:

Someone else ain’t sure.

Someone else has something we can exploit…

A couple of miles in and the breathing behind me is getting louder. CB decides to test and just squeezes the pace up a notch over the twisty technical ground. And while we come together at the frequent kissing gates – and there’s certainly none of THAT - I can feel the elastic stretching…until I’m through a gate on my own.

Eyes firmly front we squeeze the pace again until I crest a hill and the terrain opens out for a first real open space ahead and – no one in sight. Which either means the leader has flown or gone wrong.

I figure the latter but CB wants to be sure so I drop fast down the hill and then light the burners over what I know will be about 2 miles of fast running over firm ground.

You’re first!’ shout a group of walkers who set off an hour before the runners did. Okayyyy…but I want to be sure and CB figures this is THE MOVE: My flat speed has come on in leaps and bounds over the last six months and I’m fit enough to floor it and settle again. So we shake on it and play the trump card that will open a gap behind and make sure in front.

All of which means after about 45 minutes of fun and games it’s all over as a race.

I co-opt CB to my cause that is now to stay relentlessly On Task all the way to the finish while keeping the flashing lights at bay. For all his psychopathic tendencies he’s good at keeping a bargain when our goals are aligned and after all these years I’ve learned how to stroke him and can recognize the signs of sabotage. This means that brief respites and deliberate leakage are essential pressure releases so I have the energy and wit to lock it all down again.

This time I hold the pattern all the way to the finish.