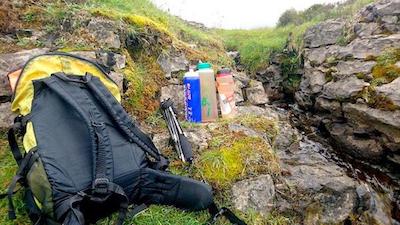 Hard to be a Hero

Despite the dearth of running-based posts here recently I can report that there has actually been some running-based stuff happening.

Quite a lot actually.

It’s just that I’ve kept it under the counter till now.

But now we’re into July and that means less than one month to go to the Montane Lakeland 100 And given I’m still pissed after last year’s result (see blog) it was almost inevitable that I’d be on the start line again.

It’s taken 3 months to get into shape to be able to handle the training – then 2 months of ‘proper’ training, and I’m currently halfway through the final month of some serious boundary-pushing. There’s been no racing to look forward to this time - it’s been a simple project of two halves:

Get The Work Done

Sort The Shit Out That Sabotaged Me Last Year

Some changes to my approach from last year have meant that since May my training diet has focused on four Hero Workouts in rotation – monotonous, bloody challenging and all solo against the clock and that means nowhere to hide. And I’m still working with a coach so I also have to hand my homework in.

Here’s an insight into two of those four:

This one can be described as Up-Over-Out & Back. It clocks in at 18km with 885m of climbing up and over one mountain and takes me between 4 hours and 2 ¾ hours depending on mode of travel and load carried.

Three of those variations are:

2. Hike with a lighter load of water filled bottles dumping the load at the summit so I can run free on the descent before loading up at a stream on the other side for the return trip

All done at maximum sustainable effort – and all done using my car as a base.

I’ve simply been adding Legs and getting more race-specific over time so that now this one has become a delightfully fun way to spend a whole day – or an afternoon and evening. You can guess the hardest bit: Getting my ass out the car after a nice cup of tea and a very civilized sandwich to go face the mountain once again…

A single loop taking in one mountain as a long flat approach, a climb up, a ridge run to the summit, a plummeting stepped rocky descent and then flat along the valley to link it all up. It comes in at 12km and 460m of climbing and I’ve run it periodically since 2008 – which means I’ve records going back over 10 years and a pb nearly as old at just under 63mins.

My ‘could I really?’ goal for this loop was actually set 3 years ago during a bout of ‘How would I know I’m in shape to race a big ultra? brain dump: Run four consecutive loops broken by a short recovery at maximum sustainable pace all within 90 seconds of each other.

No car as base this time as the start-finish is a short run away from the road so I stash some refuel supplies in a wall out of reach of foraging sheep.

May 10 rolled around and I’d finally – after some days tying myself in knots - summoned enough courage to go for my first double loop:

Three weeks later I went again – this time the goal was to repeat with half the recovery time. I came home with 66-16 and 66-18 either side of a 5minute recovery. Upwards and onwards it would appear we were going.

Then I changed my programming mix as the second half of June rolled around and promptly got stuck. Hero 2 was now the final session of the week AND came the day after a programmed long day in the hills.

I would be going into it more tired.

That was all deliberate – but I’d not appreciated how much more difficult this session became as a result of those changes - and that if I wanted to avoid the weekend crowds on this very popular mountain I’d have to be up at 4.30am to start running by 6.

June 16th and I try for 3 loops. I have doubts pre-start and in the end delivered my own self-fulfilling prophecy. The numbers told the story and hinted at the cause:

Despite seriously upping the effort level on the second one I just couldn’t move any faster – and that’s a straight fuel/depletion thing: I need to be getting more in me through the week AND take more on during the session.

Two weeks later I go again from a stupidly early start and this time while more motivated I know the odds are stacked. My long day the previous day in the hills had been delayed so I’d not started till late morning. The goal was 8 hours – done in one of those heat wave days - so that was 7pm. Drive home – eat: But not enough and too late.

This time it was a better pairing – the second faster than the first at 78-20 to 77-50 with a 5min break – but I just didn’t have the juice to work at the intensity required. I figured a third loop would have just been pathetic - when the challenge with this workout was to control it while tired and up the effort level progressively. This came at the end of a big ole week so I took that quietly delighted while wondering what it would take to break out of two loops…

I decide it’s way worth loading the dice so I have a fighting chance of completing the triple. I make one programming change so while it still comes after a long day in the hills it falls mid-week instead of at the end. In other words I’ll be fresher and will have the mountain to myself. As it happens my body clock has me up at 4.30am anyway and I’m still harboring doubts as I drive in.

5.30am and the sun is already up on what promises to be a shorts-only session despite the early hour. I grab the refuel supplies and jog out to my very familiar start-finish and secret squirrel hole.

I give myself time to ease into it by focusing on the physical cues that has this unit working well:

Keep it light – cadence up – elbows back. Find the flow…

Gradually I settle and start a controlled climb up as the tops of the nearby hills emerge from the cloud so it feels like I’m running on the roof of the world.

The descent is the crux of this loop. I can usually tell how ‘on’ I am by how smooth I am on the gentler rocky ground off the summit. Smooth gives fast and to do that means swift and sure footwork to dance at speed. I’ve gone arse over tit enough times up here to know that if you fall at speed it always REALLY hurts on the hard pointy stuff.

I’m smooth, swift and sure – blessing the fact that the relatively new steep stone steps put in by the footpath repair teams are dry. The scars of popular use are all around us here in this part of the Yorkshire Dales National Park, and footpath repair schemes are now much more common – and happening on an industrial scale in places.

For those of us who run the fells one of the differences is that it has become way harder to descend safely at speed where paths have been replaced by stepped stone slabs. To make matters even more interesting on this loop, some of the slabs are downward sloping when you descend them – and are lethal in the wet. It all adds up to precious seconds and even minutes on your personal bests!

But on Loop 1 I’m down safe and trying to hit cruise control along the valley. I stop the clock at 71-44.

5 minutes and straight into Loop 2. I need to be faster and not that much faster so the trick is where to obviously kick it up a gear. The answer to that is the first section – and some of the climb.

Half way round nearing the top of the climb and I know I’ll make a third loop. While the effort has definitely gone up everything is still very much in the green. Once more I’m swift off the top and don’t put a foot wrong on the decent. The clocks stops at 71-01.

Another 5 minutes and this time I’m working harder straight away as I know I have to just to keep the speed over the ground the same as Loop 2. I figure if I can hold this all the way up and descend smoothly for the final time I can REALLY push along the valley to drop the difference.

This is the one that counts, man…

Once again it’s finding that point of maximum sustainable effort without going mental and tipping over the edge. In my head what that DOESN’T mean is 70 minutes of effort. What I’ve adjusted it to is around 40mins of big effort, 20mins of big concentration and a little less effort (on the descent) – and 10mins balls to the wall.

‘Nothing wrong with a little positive stroking now and again.

Part of me registers that’s a measly 25 seconds shy of the reduction I was really after.

‘And that’ – as I suspect they say on the shooting range – ‘is one hell of a cluster.’