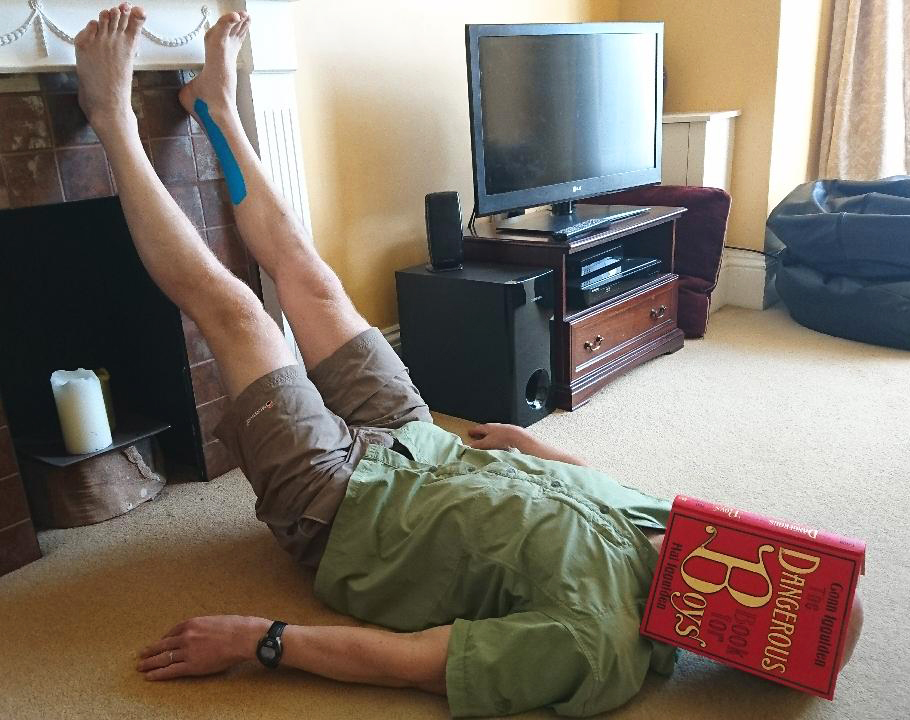 Now I know what some of you are thinking – and this is not that kind of blog. It’s this:

I’m back in the treatment room with Phil who has looked after my aches and pains for years and knows my posterior and superior aspects and distal end probably way better than is healthy.

And we’re watching my right foot turn a deep shade of red right before our eyes.

Amazing things, bodies - even when they’re off-message: Which is right where bits of mine are at the moment.

Four weeks ago and it all felt like shin splints – except that didn’t entirely stack up because:

I’m not exactly new at this game

I’d not done anything new

But it bloody felt like it and it HURT.

So we held an inquest and retained an open verdict – something didn’t stack up.

But it still bloody hurt and training had come to a juddering halt – and that wasn’t fair ‘cos I’m on a Project here, dammit!!

Getting dizzy so headed for a different physical therapist and different opinion and different direction. Not completely convinced but I could follow the reasoning so I went with it. And it felt like a breakthrough – for a short time. Heck, I even got complemented on my running style by a passing walker one outing and in 35 years of doing this thing I can’t EVER recall that happening. I felt free, easy and light…

And then came crashing back down again.

‘Time for the Nuclear Option then.

Symptoms to this point had been what I would describe as ‘guerilla warfare’ - not enough to completely kill me but enough to generate almost constant discomfort at rest and play. Technically, it’s the ‘Now I’m Just Really Pissed Off ‘ stage.

If resting the running and rehab had not worked, it was time to just run without any attempt at rehab ‘cos I knew that there were only ever going to be two outcomes here:

Either way I’d get the certainty that was proving so damn elusive – and Phil would have some screaming symptoms to play with as opposed to the slippery elusive ones I was presenting him with.

So I gave myself a four day window, gritted my teeth and hobbled off:

And just to be sure on Day 5 I went out for an hour before I saw Phil and … here we are watching my foot turn purple: Escalation achieved – result!

Time to try join the dots and figure Cause-Effect then – and after comparing notes we come up with the following:

There’s been a pattern of symptoms going back to 2014-5 and first onset of severe maceration on the soles of my feet – otherwise known as ‘trench foot’ - that have all been related to poor circulation in my lower legs. (How much this is a consequence of multiple winters preparing for the damn Spine Race is probably a moot question. Let’s just say the timing is suspicious and leave it at that).

And once again a key feature is the pooling of fluid / inflammation in the lower leg: It’s not a structural problem ‘cos I can run – as the 4 day escalation experiment proved - but it’s painful and not pretty. All of which points to s systemic problem: Most of the sabotage is happening when at rest – ‘cos I’m heading out already gritting my teeth - and that points to the lymphatic drainage system not doing it’s job properly.

All of which leaves us with the following:

Settle these latest symptoms down now - and turning the circulation in my legs up to Number 11 will be key to that.

Figure out a way to proactively and reactively manage temperature and moisture build up in/around my feet and keep the drain happening even when at rest.

So we have a project within a project – and rather more of this:

And somewhat less of this: