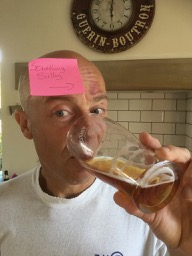 'Don't Do Anything Silly'

BANG! Something hard and unyielding punches me in the forehead. I hear my neck crack as I go down like a sack of spuds to lie blinking uncomprehendingly at the sky.

Just short of half way in the Due North Skirfare half-marathon race I’ve been taken out by a low branch that never even registered on radar consumed as I was by the task of keeping the effort high on the tricky trail.

As you do when you’re leading and running scared.

A quick check above my left eye and there’s no blood but my head doesn’t feel right at all.

‘It’s only a flesh wound – get up and fight y’bastard!’

I push quickly back upright and get my ass moving with a wry smile forming as I recall the parting words of Mrs Mouncey this morning mindful as she was of two weeks to go before hubby hits The Big One in the Lakes:

‘Don’t do anything silly!’

I’d chosen the last test to be 20km and 1000m of up-down trails in the Yorkshire Dales and it’s yet another bloody furnace day. Not that we’re unused to that anymore after someone put the sun back in summer this year. A new race so no benchmarks to work off, but I wanted a blast and this had everything I wanted: Sustained climbing, two big descents and some flat fast stuff along the valleys.

I’d taken the lead part way up the first big climb then played my joker to drop like a stone off the other side. It had all gone very quiet behind so I knew I’d got a gap – but now I was committed.

In to the second aid station trying to get as much water in me as over me as task and haste collided, then straight into the second big climb. I have an ‘Eyes Front’ rule but that doesn’t apply to the ears. Cheers and applause below me as I climb but not that close…It doesn’t really register as my attention is firmly fixed on moving as well as I can on the steep stuff ahead.

All the water courses are bone dry – no surprise there but I’d kill for a periodic dunking option. All I pass are a couple of livestock drinking barrels with dubious looking contents. Good enough to soak my hat in which is enough for some temporary respite for my steadily cooking brain.

The second high point at 500m and second big descent and the brakes come off again. Then it’s a time trial along the baking valley road pursued by silent menacing ghosts. I’m still in charge and pushing but some of the needles are starting to hit the red.

The final stop with around 3km to go has more frantic water gymnastics. I head out OK but as soon as I’m into the final long sustained tricky drag out of the village I find someone’s swiped my last gear. It’s not an implode by any means but pushing on again has become a full smack-down wrestling match.

Then a gate slams behind me.

I’m not sure I heard properly as I hadn’t registered cheers as I left the checkpoint. Or had I…

Another gate slam and this time there’s no mistake as shortly after that we hit a switch back and out of the corner of my eye there he is.

Tom – we will do the introductions later – hikes straight past me and unknowingly collects a point for dispensing with the inane chat. I’m losing ground on the running climbs so switch to what I’ve been practicing: Hiking speed climbing. I’m not making inroads but he’s not stretching ahead much either.

Onto the false flat and it’s still broken ground that kicks up and drops periodically. Tom is ahead but still not disappearing. I know we have a steep downhill to the finish but I just need something to regain some momentum before that as needles are starting to wobble crazily now. Then a gradual grassy drop allows me to get my legs moving in a semblance of order again.

Dropping through steep, rough limestone clefts I’m starting to close before the final stile chucks us off down the last steep tussock-strewn slope. I checked this out before we set off and know we have a stile to sight on at the bottom before a hard right and 100 yards to the finish. Tom veers off but I line up on the stile, embrace gravity and hope my bottom half will keep pace with my top half. I hear children’s voices below us screaming for Daddy and they ain’t for me this time. The stile’s coming awful fast, Tom’s right behind, people are screaming and I remember that the top of the stile is wire not wood…

Over safely, arms pumping to drive the legs…

Screaming voices, limbs pumping, vision narrows and I’m certain Tom’s right there – but to my utter relief the finish comes first and I dive just to make sure.

Thank f*** it was downhill!