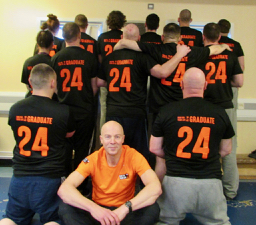 Some things are the same and some are very different. Here's the different:

I have 3 members of staff taking full part alongside the 8 men, and I have two of my Graduates from the first December group with me a peer mentors.

Oh yeah – and expectations all round are higher and more people are watching. Some of the watchers are excited and some are nervous and even fearful: Drawbridges are going up and barriers are coming down – not everyone likes to feel the wind of change on their cheek…

I belated realize we’ve tipped into zealot territory on the Eating For Health & Energy front this time and it's about to repeat on us. On Day 1 with the first group we'd deliberately fed ‘em the usual carb, sugar heavy processed meat prison scoff – then switched to way more healthy options for Day 2 & 3 as we wanted to get evidence of the effect of the contrast. Sure enough folks complained of nausea and sickness on Day 1 and left much of it: Day 2 & 3 it all got eaten and folks were aching in most places but smiling – mostly.

This time we've gone for healthy options from the start.

But right now in front of me slumped on the corridor floor on the afternoon of Day 2, J is rapidly winding himself up to a full ballistic toddler tantrum at the prospect of (just) salad sandwiches and fruit for tea.

Mistake No 1: I tell him to focus on the task now – we do tea later.

(No – can't do that ‘cos Tea is way more important than Task).

Mistake No 2: I ain't budging and I have no time for this toddler tantrum boll**ks.

(I need to make time for this TT boll**ks ‘cos it's actually a cry for help from someone in a world where gratification through food is one of the few things to look forward to – and right now I'm screwing with his reward system).

The big picture is of course that we've been working them all hard and for way longer than they're used to while taking them on a physical-mental-emotional roller coaster. All that takes energy and the simple truth is that they are all on their chinstraps and they all need more calories. I don't clock this till later – wrapped up as I am in my own pissing contest with J – but another member of staff with me does and swiftly gets Catering to bulk up the tea on offer.

Then one bright spark has another brainwave and a toaster with copious supplies of sliced bread and jam mysteriously appears as well.

Replaying it all in the car on the way home that night I belated realize it's a perfect replica of me in depleted state post big training run stumbling incoherently around the kitchen in a frenzied search for ready calories while the rest of the family run for cover.

But it's one of the biggest lessons of this second round: The consistently healthy menu and copious amounts of water really work – we just need way more of it!

Midway through Day 2 and we’re checking in with them re Reality v Expectations:

What are you thinking?

How are you feeling?

And your expectations for the gym triathlon contest tomorrow?

We go round the group and everyone speaks out loud while I transcribe what I hear:

I did better than I thought – I feel better in myself.

I haven't spit my dummy out and I'm pleased about that.'

I want to get it done. I'm sore but I'm further than I thought. I thought I'd quit – I haven't.

Everyone's won. Everyone will do it.

Great to see everyone grow in confidence.

I'm really tired – but I've done better than I thought. My goal for the race is sub 25minutes.

I've enjoyed seeing everyone stick with it.

I've noticed how much you've supported each other. Be proud! (Staff)

I've noticed the way we are all cheering each other on whether we are staff or men. It's nice to get to know you all better and great to see you support the strugglers (Staff).

Finally M in broad Scouse chips in with:

Peals of laughter at that one – then he speaks from the heart:

It's been stressful. I've had to get serious – I didn't think it'd be this hard.'

Lifting Up v Bringing Down

This group arrived fired up. That's in direct contrast to the first group who arrived nervous and somewhat subdued – as you would when you have no real clue what you've been signed up for except 10 hours – 10 hours!! - in the company of some orange-clad idiot. So I spent most of the first day bring them along and lifting them up.

The difference this time is that word is well and truly out and everyone can see and hear the transformation in those first eight men. I've seen and heard it myself: I went back in over Xmas and again a couple of weeks later to be repeatedly bombarded with two questions:

When's the next one?

So this second group arrived with the force of a small hurricane. That has meant harnessing the force in the desired direction of travel and making sure they don't blow out by lunchtime on the first day.

Hey – it's a nice problem to have!

Fiddling With The Furniture

We introduced a new element on the first two days: Eating For Health & Energy – ‘cos typically they don't. They eat – as it's been described to me – like a three year old and/or Fear Of Missing Out. This is a new direction for Catering as well but they're up for it and I've been impressed by the folks I've worked with from that team so far.

So we've come up with a first punt on this.

A key objective being to get clarity on what the barriers are for the men on this, what their areas of interest are on the topic and what we can do provision-wise within the confines of a prison system.

Which basically means asking them questions, having the courtesy to listen to the answers and acting on the information contained therein.

We did all that and they clearly got pissed off as all my answers started with the same two words:

Just me indulging myself by adopting full Coaching Mode and throwing it all back when they were looking for easy answers.

Welcome again to my world, boys!

Much later something was still bothering me about the session – something wasn't right but what was it? Then at 3am the following morning the Ideas Fairy came calling:

It was all the bullshit questions they were asking:

How much protein should I eat?

Can I get more protein?

What about sports drinks?

I'm training every day and (guess what?) I need more protein…

The solution – to borrow from an often-derided former Prime Minister:

And busting a whole load of food myths into the bargain.

But first they needed to wake up and I need to get something off my chest.

One of the advantages of running your own show is that you can drive a bus through a planned session and no-one will object. So I strapped in and drove in full crash-test mode:

‘There was something bothering me about the session yesterday and it's taken me a while to figure it out but I've figured it out and here it is. Now, just to make sure you're paying attention and get the message I'm going to be brutal and use simple colorful language. I'm aware that this is not how you do things here normally'– a nod to the Theraputic Community staff who I figure are probably having kittens about now – ‘but you need to really get this s**t in language you understand so here goes.'

‘Our body needs 3 things to function:

Other stuff is relevant but I'm keeping it simple and just using these three.'

(I nod and look ‘em all in the eye and make sure I get nods in return. It's gone very quiet…)

Stuff that you’ve all been experiencing for the last 2 days to the max – so much so that you'd all now miss ‘em if they weren't there – right?'

‘Right. So all that boll**ks about protein and soya milk and sports drinks yesterday…

YOU'RE JUST FIDDLING WITH THE FURNITURE WHILE THE BLOODY HOUSE BURNS DOWN!'

(Pause for dramatic effect. I'm quite pleased with my play on the 're-arranging deckchairs-sinking ship' analogy – I just figure my version is more relatable to my audience).

'Think about it this way: You go to R ‘– I nod to the staff member from Catering team –‘ and ask the sports drink question and R will say…' (I throw R the ball, point to ‘water' on the chart and pray he catches it)

'Are you drinking water? No? Come back to me when you are.'

'More than you are doing right now!'

It's still deathly quiet but I can see I have them all which is great ‘cos I'm in full flow now.

'You ask R the protein question and R will say…'

'Are you eating breakfast? No? Come back to me when you are and we'll talk about protein.'

Do the stuff you need to do first – breakfast, water, fizz – and then you earn the right to do the stuff you want to do. ‘Cos if you don't you're just fiddling around the edges making excuses WHILE YOUR F**KIN' HOUSE BURNS DOWN AROUND YOU!!!!'

It's all over and I'm heading out through the main gate and I check in my credentials with the duty staff.

'Oh - you're the guy who's been doing that fitness program aren't you…we just had R come through here raving about it.'

I can't resist an evil grin: