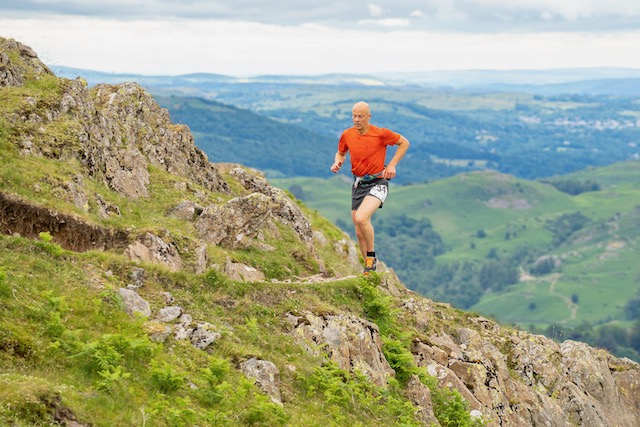 Back To Competition - and Comedy Cramping

Alright smartarse, let’s see you get out of this one.

Because I am quite literally stuck – and it’s entirely of my own doing.

I’m a few minutes into my post-race reactions and rituals the latter of which involves heading to the nearest river for a full cold water bath.

Usually a thing of unbridled pleasure after a period of physical exertion.

It’s been a bloomin’ hot four and a half hours of race effort, and while my training has been going well my racing is somewhat rusty: The last time I pinned a number on in anger was Feb 2020 just before the curtain came down on the world as we knew it.

The result of that is that I’ve neglected some stuff on the fuel front today which has had me battling the onset of full and repeated cramp attacks in both legs for the final 5miles or so of the race.

This was a real pisser as far as I was concerned ‘cos the final bit is a huge rocky plummet from 3000’ feet up on the top of Hellvelyn all the way to the finish in picturesque Grasmere in the valley below.

And I’m quite good at plummeting so my plan was to well, plummet.

What actually happened was that the Cramp Monster waged 5miles of downhill guerrilla warfare which forced me to constantly adjust how I moved in order to keep the attacks at guerrilla level and not escalate into full nuclear screaming writhing paralysis.

Which I did manage – at the cost of abandoning full killer-attack mode (sigh).

So here we are post-finish line and me with my defences down and the cramp monster sees an opening and goes full nuclear.

It starts innocuously enough - I drop my bumbag on the ground and make to scramble down the rocks into the river which triggers the first warning shot up both legs.

I know that the next one will be a real bastard and sure enough as I go to try again to bend down it’s all I can do to hold the yelp-scream in.

Then it’s full repeated strikes and it’s all I can do to hold myself upright on a handily positioned gate as my legs are locked in a vice and a few thousand volts are rammed through them while I do my best to keep the screaming inside.

‘Cos there are women and children watching.

‘Figure it’s not like that in the Grasmere village brochures.

When the power of coherent speech returns and I can see straight again I realise there is a much easier way down to the river over the other side – and I’m right by a bridge.

The problem is that I dare not even think about bending down to retrieve my bumbag from ground level. I need an angel and there’s one standing watching the show a few yards away which watching out for her son to reach the finish line.

I give it my best beseeching look and feeble gesticulation between bag and bloke:

Bless her, she doesn’t and she does – and I’m able to drag-hobble-haul my bottom half across the bridge. There’s still some more funny faces and choice language to come as the cramp monster realises his window of opportunity is closing. The bastard gets in a few more sneaky strikes that nearly has my angel swooping to yet another rescue, but I manage enough of a rearguard action to give me some neurological control and the eventual reward of tipping forward blissfully into the welcoming cold embrace of the water.

Getting out was another matter.

‘You’re gonna win, right Dad?’ said our boys as though it was all a done deal.

Such is the level of expectation in our household.

Dad did indeed have private aspirations of being first back…

Dad also knew that it was smart to have a ton of other goals lined up to go with the sneaky private one that he had way more chance of being able to control.

Of course it started with a climb that came with its own bonus reality check as just before our leading group of 5 topped out at 1300’ the eventual race winner floated past and disappeared into the distance.

And he’d started 5mins behind us in another wave.

(A few hours later as I crossed the finish line I was somewhat mollified to see said winner still on the floor. Apparently a fridge had jumped on his back in the latter stages: Go Universe!).

Anyway, our group of 5 quickly became 3 with me and my two companions seemingly attached by elastic for the rest of the race changing positions as follows: I’d drop ‘em on the descents, they’d stretch it a bit on the hike climbs and I’d hold ‘em off on the flats.

Only problem was that in the first 15miles to the checkpoint there was only one big gnarly drop where I could do real damage.

So I amused myself with psychological warfare instead.

This involved not saying a damn thing other than what simple courtesy required.

Now I generally don’t do chat so the strong silent bit is not that much of a stretch for me – but what I’ve found over the years is that many people are unnerved by silence.

I also know where I’m going today and as I don’t do freebies when I’m racing I’m also paying attention to who appears to be navigationally challenged.

Mr Chatty & The Kid have dropped the navigation ball a few times already so I’m employing the tried and tested games that keep them just ahead of me: Stopping to tie a lace or pretend to have a pee are two of my favourites. This leaves me clear to take the best lines and keep momentum going while thinking un-charitable thoughts at the imagined scrambling going on around and behind me.

I’m quite lovely normally but pin a number on me…

I hit the checkpoint in 3rd and am in and out sharpish as I suspect that my two gadflies are not a million miles away and I want to get gone as out of sight means out of mind. It’s a choice I will rue as what I actually need to do is to linger a little more and take on more fuel – and savouries and fruit in particular. In the end it’s not catastrophic and I bless my depletion training that means I can still operate effectively on fumes – it’s just that everything becomes a damn sight harder.

Chatty & The Kid pass me around halfway up the 3000’ haul out of the checkpoint to the summit of Hellvelyn. They are both climbing well and still sound pretty comfortable. I silently doff a hat in their direction – look, I can do magnanimous - and plot revenge to be enacted as we come off the top and start the plummet.

I manage to keep them in sight at what I think is a bridge-able gap once I can embrace gravity – but the cramp monster has other ideas. Fortunately for me Mr Chatty has an even worse time of it and he is forced to let The Kid go.

I eventually gurn my way past him with around 400 yards to go to the finish after which he gets to watch my comedy cramp routine.